Workers are quickly pacing toward a summer 2016 deadline for opening the 490-bed dorm at 2150 Commonwealth Avenue. The exterior, now partially sided, is nearing completion, but inside the six-story frame, there’s plenty of work left for the construction team.

Glenn Hand, clerk of works and the onsite representative for Boston College on this project, motions toward unfinished drywall and exposed support beams and insulation, showing off the mock six- and four-man apartments that will comprise the majority of the building.

Construction is scheduled to be completed at the beginning of the summer in 2016 but will still need to be furnished on the inside, according to Edward Stokes, the senior construction project manager of BC Capital Projects Management.

“Those contracts haven’t been awarded yet so we don’t have firm dates,” he said in an email. “We will obviously be ready for move in in August.”

Current BC juniors, then, will have the opportunity to be the first to live in the new dorm for their senior year.

While the building—designed by EYP, an architectural firm located in downtown Boston—will serve primarily as a dorm, holding 60 six-person and 16 four-person apartments with full kitchens, it will also house an upgraded University Health Services clinic. The wing will have 12 exam rooms, five patient rooms, one isolation room for infectious diseases, and one treatment room, among other specialty rooms. There will also be space for nine offices and a larger reception and waiting area.

The new dorm will also have five floor lounges, 15 floor study rooms, a commons area that will include a small cafe, a seminar room, and three soundproof music rooms. The majority of the lounges are large rooms with mostly glass walls that will allow the building to be lit with natural light during the day. The entrance to the building will be spacious, and part of the ceiling will extend up toward the second floor.

BC is taking a more renewable stance with the construction of this dorm, according to Hand Contractors. Independent inspectors have been meticulous with checking the insulation of pipes and quality of seals in the building to make sure the high-efficiency furnaces can function to their full potential. Hand said that 2150 will be the first BC dorm that will have a water filtration and recycling system to reduce the water consumption of the building. 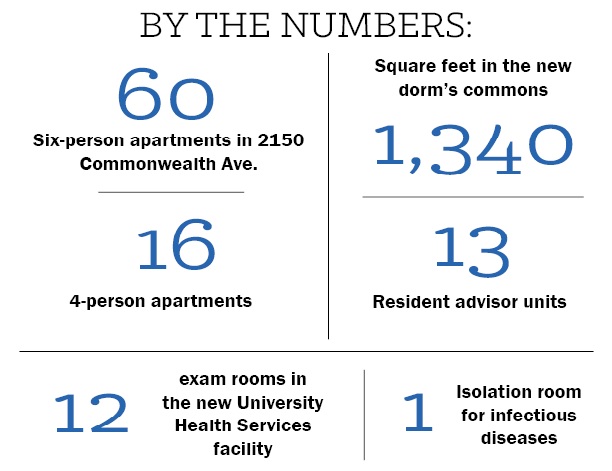 The construction of the building has gone much smoother than anticipated, considering all the moving parts involved in such a large project. Even the harsh winter didn’t slow down the project, somewhat to the surprise of Hand. The independent construction crews, contracted by Bond Brothers, worked throughout the 10-plus feet of snow because the foundational work had already been completed, according to Hand.

Construction slows during the winter if the foundation is in the process of being laid, because the ground becomes very muddy and difficult to excavate. Since the foundation was completed and the skeleton of the building was already being constructed when the first snow hit, work continued. Snow is only a factor if it melts and refreezes into ice on the steel—in most cases it is simply a matter of brushing the powder off the materials, according to Hand.

Because the dorm exterior will be sealed by this fall, finishing the interior of the building should continue uninterrupted this winter—even if there is more record-setting snowfall.

About Gus Merrell 51 Articles
Gus was the Assistant News Editor for The Heights in 2015. He has since moved to the business side as the Collections Manager and plans to make The Heights lots of money. You can follow him on Twitter @gusmerrell.

With the construction of 2150 Comm Ave, BC adds green to its usual maroon and gold motif. […]

The process ran through a familiar pattern to past years, with the Mods filling up early on in the process. For the third straight year, 2150 Commonwealth Ave. was the slowest—and final—dorm to fill up. […]

The dorms were named so that students could receive mail. […]