As the presidential election draws closer, students and faculty from universities across the nation join the political race. At Boston College, the conversation between students is diverse, as every background shapes differing political views. When observing donations made to campaigns by BC employees, however, the results are decidedly universal—every donation made by individuals listing BC as their primary employer was sent to Democratic political campaigns.

The majority of campaigns supported by BC faculty were not, in fact, in support of any particular presidential candidates—the campaign garnering the most support was that of Eric Kingson, a Congressman from upstate New York and a former BC professor.

Twenty-five percent of donations made by BC faculty members were in support of the professor and social security adviser’s run for Congress. The second-most popular campaign, however, was in favor of a presidential candidate. Former Secretary of State Hillary Clinton’s campaign received 17.86 percent of donations made by BC faculty, a distinct advantage over the 3.57 percent made to Senator Bernie Sanders’ “Bernie 2016” campaign. Other campaigns garnering support included ActBlue, a Democratic fundraising effort, and the Democratic Congressional Campaign Committee. 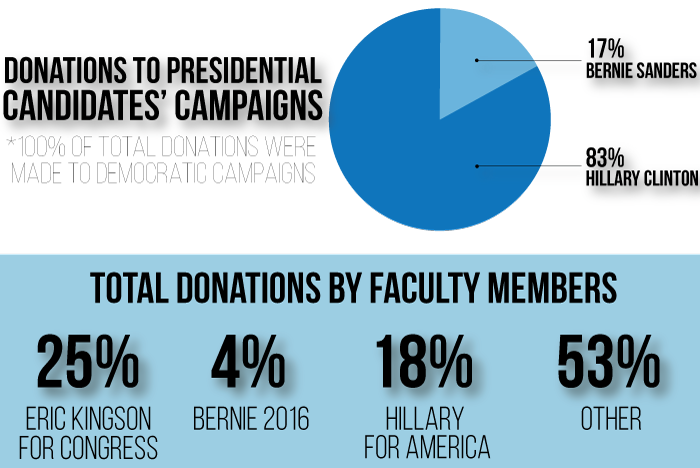 This data isn’t surprising, as it is not unusual to see professors and educators leaning left in their political stances. According to a study published in The Daily Signal in January, professors who identify as liberal outnumber conservatives five to one. Yet the conversation at BC extends beyond left-wing politics.

Jason Donnelly, professor of theology and a current town meeting member in his hometown of Arlington, Mass., elaborated on his experience with politics as a BC graduate school student.

“There was a wonderful political diversity,” he said. “It was great because there was a wide spectrum of political beliefs and a kind of commitment to reasonable engagement. Topics were engaged in confidence, with a kind of trusting relationship—it was never a debate.”

Looking only at active donors may not be an accurate representation of the entire BC community, a fact worth considering before making generalizations based on the public records.

The political discussion on college campuses extends much farther than the limits of Chestnut Hill. In February, the Harvard Crimson released a report with results fairly similar to BC’s. Out of BC professors’ donations to only presidential campaigns, 83 percent went to Hillary Clinton, with 17 percent going to Bernie Sanders. At Harvard, 91 percent of donations to current presidential candidates went to Hillary Clinton in a similar majority. Their donation history did differ in that it did include Republican candidates—Jeb Bush, Marco Rubio, and Chris Christie received funding from Harvard faculty, instructors, and researchers.

Harvard does not have a history of subscribing to Jesuit ideals, however, which traditionally align with conservative politics. Georgetown University, a school that promotes the same Catholic values of BC, is also similar in political alignment. The Hoya disclosed in 2008 that over 70 percent of donated funds went toward Democratic candidates, with a distinct majority going directly to candidates’ campaigns rather than general party committees. The political environment on the campus is similarly diverse as well. Scott Fleming, assistant to the president for federal relations, said that “political dialogue on our [Georgetown] campus is pretty balanced” between parties. Based on their donation patterns in the past few years, both BC and Georgetown can be considered progressively liberal.

Policy appears more restricted when considering the University of Notre Dame, another notable Catholic institution. While BC allows for its faculty to consider their own political beliefs without consideration for the Catholic tradition, Notre Dame has proven to be more involved with its employees’ political alignment. In 2011, the National Catholic Register reported that Roxanne Martino “abruptly resigned” from her role on the university’s Board of Trustees after a month-long scandal concerning her sizable donations to political-action committees that identified as pro-choice.

The National Catholic Register calls Notre Dame “the nation’s preeminent Catholic university,” and the institution has received pressure from Catholic institutions to uphold traditional Catholic ideals.  After the university honored President Barack Obama in its 2009 commencement ceremonies, bishops across the country renounced the university, and the Cardinal Newman Society launched a petition campaign in favor of the faith’s traditional values. BC and Georgetown’s faculty are still afforded open political liberalism as the institutions have avoided backlash from the Catholic Church.

While Catholic values may not align with the political left-wing, BC’s faculty does—at least according to the public records available on campaign donations.

Clinton, Trump, and the Changing Face of the Democratic Party

A look at how race and gender issues factor into the 2016 presidential election and Hillary Clinton’s effect on the Democratic Party. […]

1,600 Bostonians packed into the Orpheum Theatre on Friday night to attend the Our Revolution Boston Rally. Both Senator Bernie Sanders and Senator Elizabeth Warren spoke at the rally about the need for continued change in America. […]

Brain Games: Inside the BC Psychology Department

The implications of the various psychology research experiments conducted in McGuinn Hall are something to get really psyched about. […]