A sense of peace can often be forgotten amid the bustle of Newbury Street. But early this past June, an elegant and calm oasis opened in one of the street’s newest storefronts. Lady M Cake Shop, famous for its mille crepe cakes, is an addition to Boston anticipated by foodies and cake-lovers alike.

Originally opened in Japan by Emy Wada, Lady M was bought by the Romaniszyn family in the early 2000s. Eager to expand Lady M’s presence in the United States, Ken Romaniszyn began opening Lady M’s first New York boutiques, the number of which steadily increased over the following decade as the brand gained renown. This past year, however, has been record-breaking for Lady M in terms of expansion, as it has opened three more locations in New York, as well as its first Boston storefront, which was originally projected to open in the early spring of 2015.

“It took a long time [to open the Boston location] just because of permitting,” said Kevin Hee, Lady M’s operations manager. “We originally intended to [have] seating, but that was a longer [permitting] process so we took it out. And when you take it out, you [eventually] have to put it back in. The permitting process for that is now finished, we can do it, but now we have to do the building.”

Yet despite the momentary lack of seating, the design of Lady M’s Boston boutique is a sight to behold. Painted entirely in a soft white, with a few pictures of Lady M cakes on the walls, the store is a tranquil bubble within the city. Visitors immediately gravitate toward the display case, which is filled with Lady M’s layered cake creations. This effect was purposefully planned and executed by architect and designer Sam Trimble.

“Everything is very white, so the only things that have color are the cakes,” Hee said. “They are the only flashes of color, even when we use our floral decorations, it’s all white flowers. [So] the eye goes directly to the cakes.”

Although the cakes are prepared in New York and delivered fresh each morning, the finishing touches and decorations are done by a pastry chef in the boutique in order to maintain the cakes’ stunning appearances. 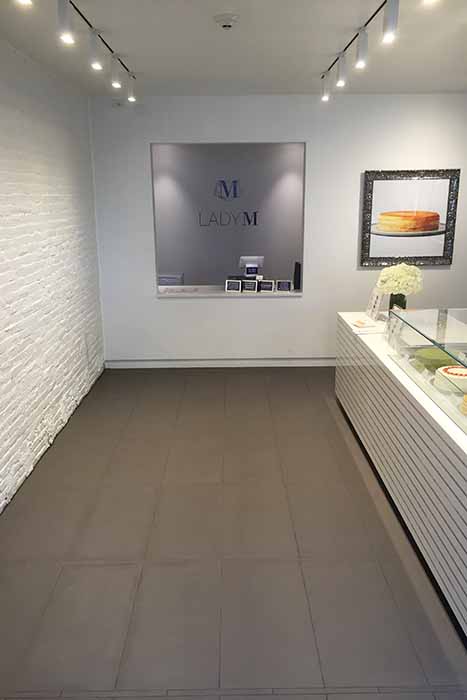 Lady M’s Boston location offers more traditional confections, such as chocolate mousse cakes (the Couronne du Chocolate), strawberry shortcakes, and cheesecakes, as well as some more innovative options. Especially popular is their specialty mille crepe cake, which is made by layering up to 25 thin, handmade crepes with pastry creme. The mille crepes can be purchased in more traditional flavors such as a soft vanilla, or more exotic ones, like green tea or coconut.

The signature vanilla mille crepe cake is composed by layering the delicate and delicious crepes with a smooth vanilla custard creme. The top crepe is caramelized to create a creme brulee effect, a bolder flavor that contrasts wonderfully with the subtle vanilla. Lady M’s other mille crepe cakes, such as their green tea or coconut, pack more of an obvious punch, delighting eaters with more shocking and complex flavors.

Another success in the Newbury Street location has been the Gateau aux Marrons, a subtle and delicate chestnut cake that Hee recommends enjoying alongside a light cup of tea.

But even with the range of elegant flavors already available to Boston customers, Lady M will also offer a Boston-exclusive red bean mille crepe starting in September. This crepe cake will allow Lady M to combine the flavors of a more traditional Japanese dessert that might be newer to Boston customers with its already-popular crepe cake.

The red bean mille crepe cake, based on the Japanese dessert ‘azuki,’ will be prepared by boiling down red beans and adding copious amounts of sugar.  This reduction, which results in a light yet sweet bean flavor, will be mixed into a pastry creme and layered in between the crepes.

And with three successful months already under its belt, Lady M is looking forward to the months ahead, which will bring seating along with even more flavors of cakes to the Newbury Street location.

“We just want to make people happy, and we just like to sell cakes,” Hee said. “We’re happiest selling cake. Who wouldn’t be?”

About Madeleine D'Angelo 111 Articles
Madeleine was the 2017 metro editor for The Heights. She is from Chevy Chase, MD, and would like to thank her mom and dad for reading down this far on the page. You can follow her on twitter @mads_805.
Twitter

A Seduction by Food: How a New Movement Captured the Country

Food is the only form of art you can experience with all five senses. […]

The mystery of 114 Newbury Street

There’s a storefront on Newbury Street that never seems to stay the same. […]

Evy Tea and Minus the Moo are two young retailers that pride themselves on locally-sourced products. […]