Scores of Venezuelan expatriates gathered in Copley Square on Wednesday night to show support and solidarity with those who are still in the country and are fighting for the restoration of the rule of law, freeing of political prisoners, and the respect of basic human rights. The event organizers picked the Copley location for its centralized position, as it would maximize exposure, and its proximity to the Venezuelan consulate on Boylston Street.

The event, which lasted from 5 to 7 p.m. and drew over 50 people, paralleled the sentiment of the masses that took to the streets in Caracas, the Venezuelan capital, among other cities, and showcased the discontent the people have toward the current socialist regime led by President Nicolas Maduro, who became head of state after the death of former president Hugo Chávez in 2013. The situation in the country has spiraled out of control over the past few years, with the International Monetary Fund predicting inflation rates above 1,600 percent next year. Hyperinflation has then led to mass shortages of food, medicine, and other basic necessities, according to CNN.

In #Boston a pro-recall group demonstration shows support for the Venezuelan opposition movement. "No justice no peace" they say. #RR16 pic.twitter.com/XdyuZJhB9L

David Bonyuet, one of the coordinators of the demonstration, has been in touch with “Mesa Unidad Democratica” or MUD, the opposition coalition in Venezuela, in order to arrange events that raise awareness of the Venezuelan crisis abroad. He said that one of the main goals of those in attendance, many of whom were either political refugees or had been exiled, was to show their loved ones that have stayed behind that they are not alone.

“The Venezuelans of New England are uniting to express our support toward those that have stayed behind and to denounce the refusal [of the government] to allow for a constitutionally dictated recall referendum,” he said in an interview conducted in Spanish. “[The government] has brutally responded to these efforts … it is clear that [Maduro] has control of both the electoral college and the courts to avoid this process.”

Over the past year, the opposition coalition has enjoyed several high-profile victories in the legislative arena, securing control of the National Assembly for the first time in 17 years, according to The New York Times. This has led to an increase in tensions between the government and the opposition, however, causing many to fall victim to a crackdown against dissent. One of the leaders of the coalition, Leopoldo Lopez, has been imprisoned for political reasons since 2014, according to the U.N. Commissioner for Human Rights Zeid Ra’ad Al Hussein. Political prisoners have become a hot-button issue in the country.

“We support all measures that are for democracy, for the liberty of political prisoners, and for freedom of expression,” Bonyuet said. “The issues in Venezuela are [out of this world].” 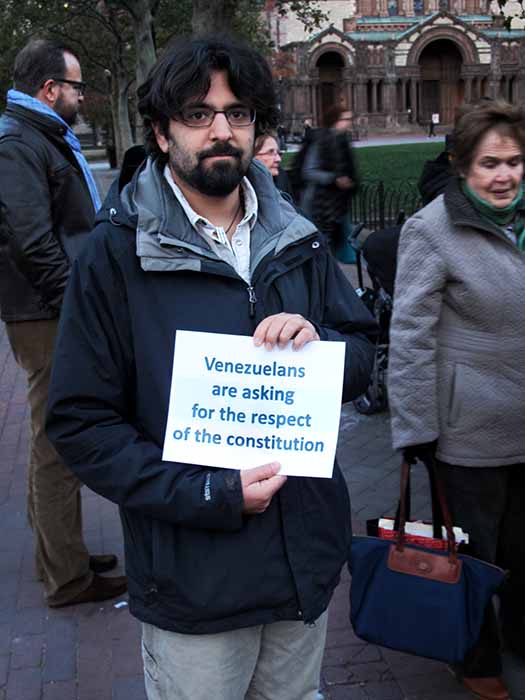 At many times during the march, the crowds intoned the words of the national anthem, calling for a return to more traditional constitutional values and normality. Several attendees were moved to tears at this moment, some out of hope for the future and some out of anger and despair due to the current situation. At other times they chanted for liberty, justice, and the respect of the constitution.

“We are all here asking once more in front of the Venezuelan consulate for liberty for the people of the country and for the release of political prisoners,” said Ana Julia Jatar, the sister of the only journalist currently jailed for political reasons in the country, in an interview conducted in Spanish. “Today has been significant, the call for the demonstrations has surpassed all expectations … the political leaders have a commitment to the Venezuelan people, [who] have been kidnapped by a totalitarian regime.”

So far, Bonyuet has organized several events, all featuring attendance similar to the one on Wednesday, something he attributes to the unwavering commitment of the people involved as they try to support those who are embroiled in the struggle. As a result, many non-governmental organizations have begun working from abroad to alleviate the situation in the country in any way they can. Some of these, such as Venezuelan Women in Action, which works toward ending gender violence in the country, and Sin Mordaza—Against Censorship—which works to ensure that freedom of the press is upheld, are working within the city.

The group noted that if the situation does not change in the near future, it will conduct further demonstrations to keep raising awareness.

About Juan Olavarria 70 Articles
Juan Olavarria is the Metro Editor for The Heights. He is double majoring in Economics and Philosophy. He enjoys watching Liverpool FC and has to frequently remind himself to stop trying to defend the merits of a midfield diamond. You can follow him on Twitter at @Juan_Heights.

Online or Print: The Trip That Helped Me Break The Screen

Books have a special ability to transport the mind into unfamiliar settings and lives foreign to our own. […]

With the creation of Mujeres Venezolanas en Accíon (MVA), Latin American activists hope to combat gender discrimination and violence by allowing women to tell their stories. […]

A Local Activist Is Bringing Ferguson’s Lessons Home To Boston

When Ferguson became a hotbed of activism following the shooting of Michael Brown, the Missouri suburb was right where Daunausia Yancey knew she needed to be. […]