After opening to the public on Oct. 8, the Museum of Fine Art’s newest exhibit, Takashi Murakami: Lineage of Eccentrics, has attracted everything from art-loving intellectuals to tourists snapping selfies. Last week, however, the crowd was different. Sprawled out on the colorful floor covering of Takashi Murakami’s work entitled Field of Smiling Flowers were children, carefully drawing the colorful swirls and figures on the ground beneath them and the canvases surrounding them.

Lineage of Eccentrics, which runs through April 12,  juxtaposes 12 of Murakami’s works with over 30 pieces from the MFA’s world renowned collection of Japanese art. The pieces create a dialogue between traditional and contemporary Japanese art—to link between the past and the present.

Widely considered as one the most prominent contemporary Japanese artists of his time, Murakami’s colorful designs are instantly recognizable by the public. He is also regarded for collaborations in the music and fashion industries. The cover art for Kanye West’s 2007 album Graduation was designed by Murakami, and he has worked with brands such as Louis Vuitton and Supreme.

Lineage of Eccentrics came to fruition thanks to a long-standing partnership between the MFA and Murakami. In 2001, the MFA unveiled Murakami’s first major exhibit in the US, Takashi Murakami: Made in Japan. Sixteen years later, Murakami is back in Boston, and, according to Anne Nishimura Morse, William and Helen Pounds Curator of Japanese art, his work reflects a clear shift in style.

Concerned with post-war Japan, and tremendously influenced by the Tohoku earthquake and tsunami in 2011, Morse also explained that Murakami’s work seeks to address the themes of impermanence and the transience of human life, and answer the questions, “Where are we all going? What is our future?”

In his search to answer these questions, Morse noted that Murakami has “increasingly embraced the historical elements of Japanese art,” largely in part due to increased collaboration with his mentor Nobuo Tsuji, a notable Japanese art historian. The exhibit takes its name from Tsuji’s book Lineage of Eccentrics.

For that matter, Takashi Murakami: Lineage of Eccentrics is not merely a conversation between traditional and contemporary works of art, but three people: Murakami, Tsuji, and Morse—the artist, the scholar, and the curator.

“It was very much a dialogue among the three of us about which pieces to include,” Morse said.

The exhibit is organized thematically into six sections, the first devoted to Murakami’s theory of Superflat—a combination of art and culture— and the remaining five devoted to Tsuji’s principles of Japanese art history, and their intersection with Murakami’s works.

The exhibit opens with Transcendent Attacking a Whirlwind, a new piece created specially for the MFA. Nearly 33 feet long, the painting draws inspiration from a six-panel folding screen of the same title, created by Soga Shohaku in 1764. Describing himself as a “spiritual heir” to Shohaku, Murakami applies the same unorthodox and eccentric approach to painting. Borrowing the whirlwind and swirl motif common in Shohaku’s work, Murakami expresses volume and movement while simultaneously compressing the surface of the canvas.

This reflects Murakami’s theory Superflat, the intentional flattening of a composition both visually and metaphorically. Superflat reflects the aesthetic tradition of Japanese art, along with the nature of post-war Japanese culture and society. Murakami argues that the power of Japanese art resides in its flatness.

The second gallery follows the theme of animation, which Tsuji argues does not originate exclusively from Western tradition, but rather Japanese tradition, specifically 12th- and 13th-century handscrolls. Reading from right to left, viewers roll out these picture scrolls, and by doing so the figures appear to move. Night Attack on Sanjo Palace, a 23-foot long handscroll and one of the MFA’s most coveted pieces, was selected for this gallery.

Kazari, or the “will to decorate” comprises the focus of the third gallery. Dominated by Murakami’s piece Kawaii—Vacances: Summer Vacation in the Kingdom of the Golden, flowers with expressive faces and cascading vegetation set against a gold-leaf background decorate the canvas, reflecting Murakami’s contemporary take on traditional motifs. Originally created as part of a display at Versailles in 2010, this piece attempts to elevate viewers’ appreciation of installation art.

“In the West, we largely think of paintings as fine art and everything else as decorative arts, but in Japan there is not as much of a distinction,” Morse said.

By transforming an entire space into a work of art, kazari seeks to transport viewers into an alternate reality, one of imagination. 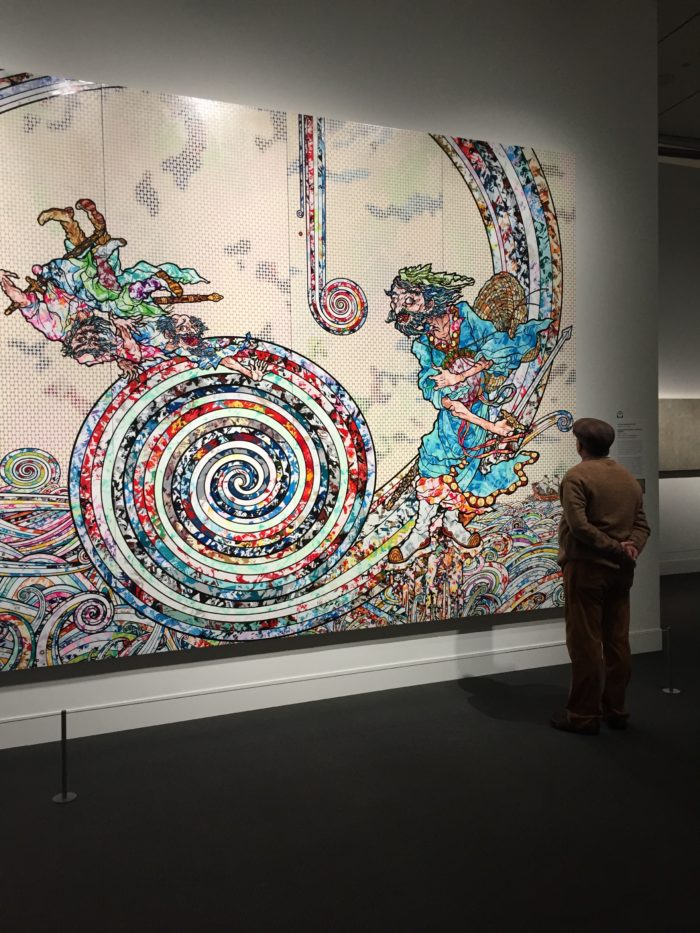 Asobi, or playfulness, dominates the fourth gallery. Murakami’s painting Lots, Lots of Kaikai and Kiki, is juxtaposed with traditional representations of Japanese monsters, along with Nakamura Kabuki Theater by Hishikawa Moronobu, and Tug-of-war with a Demon by Shohaku Asahina. The figures Kaikai and Kiki testify to the influence of manga and anime on Murakami’s work, but their origins are rooted in tradition, not merely popular culture.

The fifth gallery covers the theme of religiosity. Murakami’s sculpture Oval Buddha Silver stands next to Shaka, the Historical Buddha, and was created in response to the 10th-century piece. Inspired largely by the lotus pedestal base of the ancient work, Oval Buddha Silver serves as a hybrid of old and new, and testifies to Murakami’s belief that art needs to constantly evolve to remain relevant.

Lineage of Eccentrics closes with the never-before-seen piece Dragon in Clouds-Red Mutation: The version I painted myself in annoyance after Professor Tsuji told me, “Why don’t you paint something yourself for once?”  Created by Murakami in a 24-hour period in response to Dragon and Clouds, by Shohaku, this painting embodies the theme of eccentricity essential to Japanese art history. Swooping red strokes splash across the canvas, evoking intensity and emotion.

“Viewers can feel his presence in the work of art itself,” Morse said. “In contrast to previous works which are usually polished and sophisticated, by putting himself directly into the piece, the result was a work both dynamic and primal in nature.”

“Many people come in saying ‘I don’t get Murakami,’” Morse said. “My goal is for the public to come out and say, ‘Now I finally get it, I know where he is coming from.’”

The exhibit Graciela Iturbide’s Mexico, featuring the Mexican photographer’s work, opened at the Museum of Fine Arts (Boston) on Saturday and runs until May 12. The artist employs photography to deliver insight about the what she sees as both the unique and the contradictory nature of life in Mexico. […]

The Future is Now: #techstyle Showcases Innovation in the Fashion World

The Museum of Fine Arts’ vision of the future is even more exciting that the thought of skin-tight jumpsuits and chrome footwear.
[…]