For six and a half days, Boston College football was relevant again.

Following a 41-34 road victory over Wake Forest—one that supposedly confirmed BC’s explosive start to the 2018 campaign—the Eagles cracked the AP Poll for the first time in 10 years, clocking at No. 23 in the nation. Through three weeks of play, BC was averaging 52.7 points and 577.7 yards of total offense, both good for seventh in the country. Fans even went as far to compare the 2018 Eagles to the Matt Ryan-led teams of the late 2000s—that was, until the second quarter of BC’s Week Four matchup against Purdue.

The 0-3 Boilermakers outplayed the Eagles on both sides of the ball, outgaining head coach Steve Addazio’s team, 200-37, in total yards during the first half of action. Fifth-year senior quarterback David Blough carved up BC’s secondary, tossing a trio of touchdowns for 296 yards. Meanwhile, Anthony Brown put on the exact opposite kind of performance, throwing four interceptions, three of which came on successive drives. To make matters worse, A.J. Dillon had the worst game of his career as a starter, averaging just 3.1 yards on 19 carries.

Honestly, Addazio and Co. looked reminiscent of the same Eagles that started the 2017 season 2-4—a group haunted by turnovers, missed tackles, and predictable play-calling. Granted, it’s important to remember that one game hardly defines a season, and if BC was to lose any contest this year, it was a non-conference matchup in West Lafayette, Ind.

Moreover, personnel-wise, the Eagles are way better than the team that showed up to Ross-Ade Stadium on Saturday. Regardless, after that kind of outing—one that had Addazio telling reporters “I don’t know what that was” in the postgame press conference—it’s pretty clear the Eagles aren’t the 23rd-best team in the nation, at least not yet.

Non-conference or not, the blowout was still costly. The 17-point drubbing stripped the Eagles of not only their national ranking, but also a spot in the receiving votes section of the AP Poll. Just like that, the number next to BC’s name, as well as the corresponding hype, vanished.

Luckily for the Eagles, they weren’t the only ones that were humiliated on Saturday—actually, it was a theme throughout the ACC, a pattern that could very well linger on for the rest of the year. We’re a quarter of the way through the regular season, and it’s apparent, especially after what transpired last year, that the conference just isn’t what it used to be.

Virginia Tech—one of several ACC teams affected by Hurricane Florence—had about two weeks to prepare for Old Dominion, a team that started the season 0-3, even losing its season opener to Liberty, 52-10. It was all but assumed that the Hokies would cross the state and walk away with their third win of 2018. Instead, they were handed one of the biggest upsets in school history. Led by backup quarterback Blake LaRussa, the Monarchs orchestrated four fourth-quarter touchdown drives—all of which spanned at least 65 yards—to turn a seven-point deficit into a two-score victory.

VTech starting quarterback Josh Jackson went down with a lower-leg injury in the final frame, but that’s hardly an excuse considering that Old Dominion was playing with a second stringer of its own and had already tallied 35 points by then. Like BC, the Hokies plummeted in the rankings, dropping out of the AP Poll after climbing up the No. 13 spot in the first few weeks of the season.

Louisville too was utterly embarrassed over the weekend—at least for Bobby Petrino, the defeat came against another conference opponent. Then again, according to Virginia head coach Bronco Mendenhall, only about a third of his roster is composed of ACC-caliber players. Talented or not, the Cavaliers—staging another surprise September—steamrolled the Cardinals on Saturday, 27-3. The loss of Lamar Jackson looks more catastrophic by the week, as quarterbacks Jawon Pass and Malik Cunningham combined for a mere 175 yards of total offense.

Then there’s Pittsburgh, which has been put to shame not once, but twice over the course of the last three weeks. This past weekend, the Panthers conceded 38 points to a North Carolina offense that mustered a mere 19 in a blowout loss to East Carolina earlier this month. Nathan Elliott, who had completed just 50.7 percent of his pass attempts in the first two games of the year, finished 22-of-31 for 313 yards and a pair of touchdowns. Pittsburgh made the Tar Heels—presumably a two or three-win team at the start of the season—look like a legitimate threat. Of course, just two weeks before that, the Panthers were rocked on national television, while hosting “rival” Penn State. 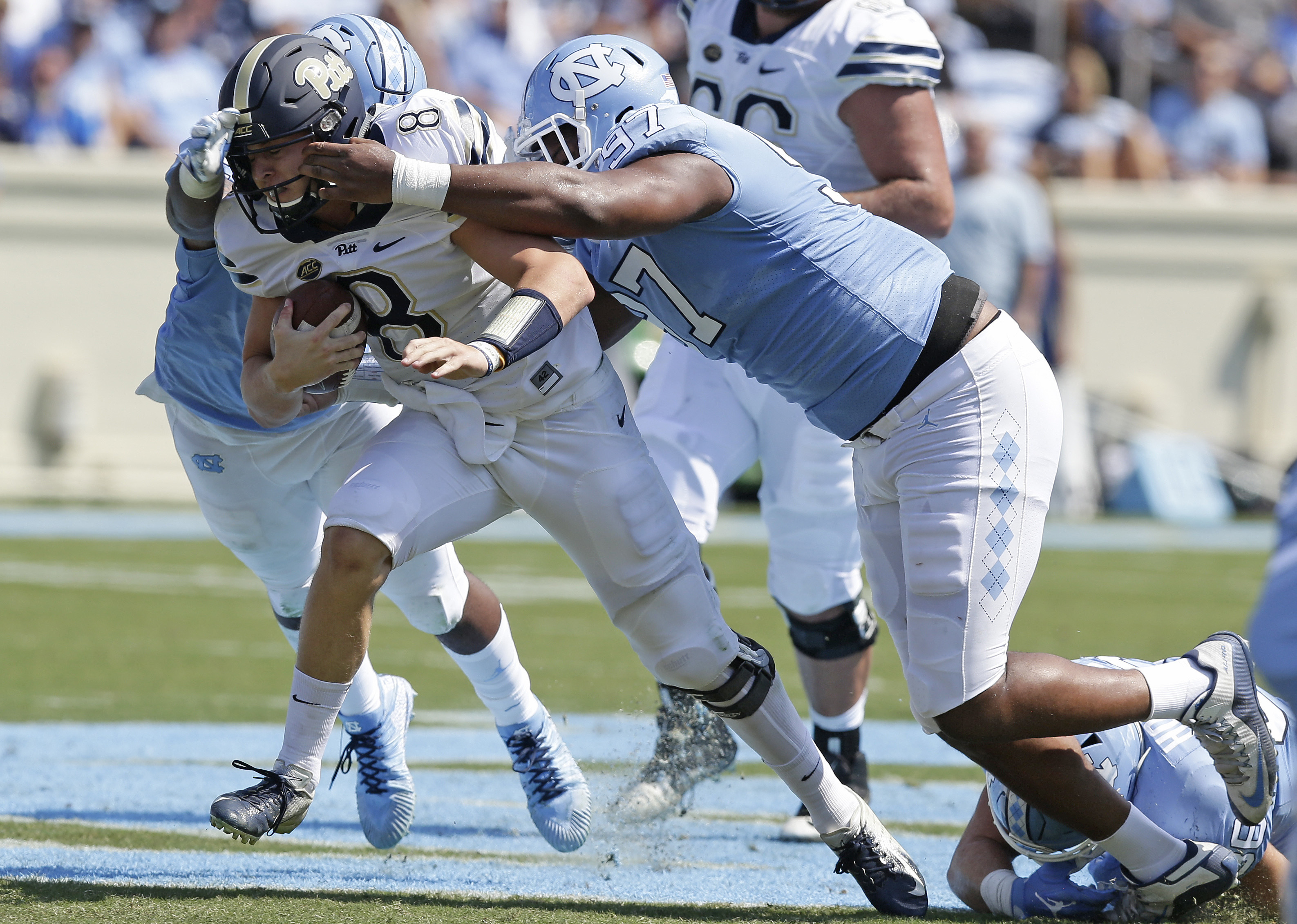 Factor in Wake Forest’s blowout loss to No. 8 Notre Dame, and a couple other scarring performances from earlier in the season—like Florida State’s near-loss to Samford and 23-point defeat at the Carrier Dome, not to mention Miami’s shameful Week One outing against LSU—and you have a season’s worth of head-scratching moments.

Just two years ago, the ACC undoubtedly leapfrogged the SEC as the best conference in college football when Deshaun Watson led Clemson to a 35-31 National Championship victory over Alabama. It was only a matter of time. After all, the year prior, the Tigers cracked the College Football Playoff and came within one quarter of upsetting Nick Saban’s fabled Crimson Tide.

Clemson was the posterboy, but the Tigers weren’t the sole reason why the ACC was so special. From top to bottom, practically every team presented its own set of challenges for opponents. That’s partially why it was so hard for BC, Syracuse, Duke, and UVA to rebuild their programs. As soon as conference play began, it was essentially all-out war.

Everyone thinks of Watson and Jackson—two of the best quarterbacks to ever do it—but the quarterback depth extended far past the Heisman nominees. Deondre Francois, Jerod Evans, Mitchell Trubisky, Nathan Peterman, and Brad Kaaya rounded out the league’s best signal callers. To put that in perspective, the 2016 iteration of the ACC had five NFL quarterbacks—and potentially another in Francois—in addition to a practice squad gunslinger.

Only three teams in the conference finished below .500, and eight of the 14 ended the year with eight or more wins. It gets even crazier when you look at what the ACC accomplished in the postseason. The conference totaled nine bowl victories, the most in the FBS. Its .750 win percentage was .083 points higher than every other Power Five conference. FiveThirtyEight actually charted just how remarkable the ACC’s bowl season was.

Using the site’s Elo ratings—a metric system that estimates the relative quality of every single FBS team—Neil Paine calculated how the league’s postseason success stacked up against conferences of the past. The article was published before Clemson’s National Championship win, so it only included the ACC’s first 11 bowl games. Based off the Elo Ratings, the league’s teams should have lost eight of those 11 contests by an average of 2.7 points per game. Instead, they flipped the script, winning eight by an average of 7.6 points.

When you throw in the Tigers’ nailbiting victory over Alabama, the ACC’s six-win gap was the largest in college football history. The reign, however, was short-lived.

Last winter, the ACC ended the year with the second-lowest postseason win percentage in the Power Five. Even though the conference sent 10 teams to bowls, only four of them emerged victorious. Four teams finished inside the AP Top 25—one less than the year before—but that statistic alone couldn’t mask what was a rather disappointing season for the “best conference in the country.”

Sure there were a few surprises, such as Wake Forest’s ascent, BC’s second-half finish, and Miami’s temporary return to the glory days of the “U.” But there was also FSU’s fallout, Syracuse’s self-destruction, and UNC’s seismic drop off. At the end of the day, five teams closed the season with sub-.500 records, and the bridge between Clemson and Miami—something that was debated for months—was way larger than anyone could have ever imagined: In fact, the Tigers rode a high-scoring first half to a 35-point rout of the Hurricanes in the ACC Championship.

A year has passed, and that gap has only widened. Besides Clemson, every ACC team looks vulnerable, and while quarterback play doesn’t always directly correlate to team success, it definitely separates the Tigers from the rest of the pack. With the exception of Ryan Finley—the lone ACC quarterback listed inside the top 10 of ESPN analyst Mel Kiper Jr.’s preseason position rankings—and perhaps Francois, Trevor Lawrence looks like the conference’s only future NFL signal caller.

What’s interesting is that the overall talent is still there. Between 2017 and 2018, a combined 18 ACC recruiting classes fell inside the top 50 of 247Sports’ prospect rankings—the same exact number as the previous two years, the supposed peak of ACC play.

Maybe the highly touted players simply aren’t panning out. That’s certainly true for guys like FSU’s Cam Akers and Louisville’s Jawon Pass. The former was projected to be one of the best running backs in the nation, but has only logged four 100-yard games in the first 17 games of his collegiate career. The latter is on the brink of losing the starting job to a true freshman, after nearly falling to Western Kentucky two weeks ago and failing to string together a touchdown drive against UVA this past weekend.

Currently, there are only three ACC teams inside the AP Top 25, and the conference is clearly Clemson’s to lose. In just a couple years, the league has been one-upped by the SEC and the Big Ten. For the moment, the ACC has taken a back seat. On the bright side, every week will bring a bounty of upsets and surprises. The bad news? There’s no way of knowing who’s for real anymore—and for those coaches on the hot seat, a tough schedule is no longer a viable excuse.

About Andy Backstrom 452 Articles
Andy is the managing editor of The Heights. He is from the suburbs of Philly, but has been an Arizona Cardinals enthusiast since the first grade. Every so often, he'll replay Super Bowl XLIII on Madden to exact revenge on his father's beloved Steelers. You can follow him on Twitter @AndyHeights.

BC Should Cover The Incidentals For Full-Scholarship Athletes

With new autonomy from the NCAA, the ACC is likely to allow colleges to offer scholarships to athletes that cover the full cost of attendance. Should that be the case, BC should extend that to all full-scholarship athletes. […]

Kellett’s 90th-Minute Equalizer Helps Eagles to Draw With No. 18 Hokies

BC midfielder Joe Kellett scored on a free kick in the 90th minute to force overtime, and the Eagles parked the bus and hung on to escape Blacksburg with a 2-2 draw. […]

BC and head coach Jim Christian took a blow on Wednesday, as it announced that talented point guard Wynston Tabbs would undergo knee surgery and miss the 2019-20 season. […]