Don’t let the box score fool you. Only a glance over at Matthew Gaudreau can tell the real story.

The younger brother of last year’s Hobey Baker Award winner had his hands clenched throughout the second and third periods of Friday’s game. He kept his elbows leaning on the edge of the wall, arms upwards so that his head could rest on his fists. And he looked how most students do sitting through a 75-minute intro to microeconomics lecture: bored, uninterested, and wishing he was in the Mods or curled up with the ultimate bae, Netflix.

It’s hard to blame Gaudreau for feeling that way. So did most of the crowd.

Throughout the game, Vermont executed more effectively than BC on offense, outshooting the Eagles 11-6 after the first, 24-11 through the second, and finishing overtime at 34-24. The Eagles consistently had trouble getting quality shots off, if they got any off at all—first liners Adam Gilmour and Zach Sanford didn’t.

Even more so, the Eagles simply looked slow on the ice Friday’s game, as if the zamboni hadn’t melted it well enough. BC’s forwards were lacking in their reaction time, either swinging through air, making errant shots, or not alertly receiving passes. And for all the speed the Eagles lacked, the Catamounts came through—UVM looked right on point with each of its passes, getting off expertly timed shots on BC goaltender Thatcher Demko.

Oddly enough, BC’s best offense came from several of the team’s lesser used players, through a makeshift line consisting of Austin Cangelosi, Destry Straight, and either Ryan Fitzgerald or Quinn Smith. The four combined for six shots, giving Vermont goalie Mike Santaguida his toughest tests of the night. The group’s hot streak extends back to each of the last two games—Fitzgerald and Straight (with assists from Cangelosi and Fitz) each had a goal in BC’s Beanpot opening round loss to Northeastern, while Cangelosi scored the game-winning goal in the Eagles victory over Merrimack last Friday. 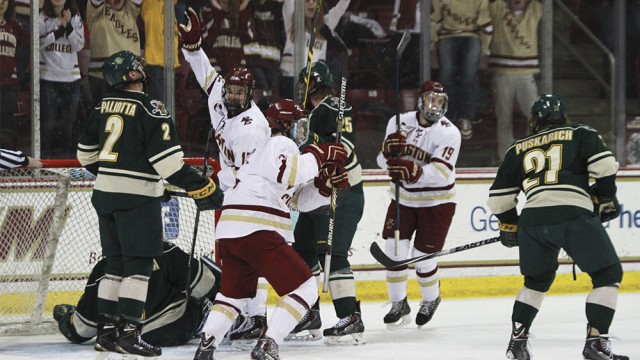 Cangelosi continued that streak with a power play goal at 14:45 in the first, his fifth of the season. The goal knotted up the game at one in a first period largely dominated by the Vermont’s offensive weapons. UVM’s Brady Shaw extended his team lead to 12 goals by putting the Catamounts up 1-0 after a power play at 6:09—sitting cleanly in front of the net without the knowledge of Demko, the sophomore received a smooth feed by Jake Fallon from the top of the right circle.

In the second, the Eagles’ special teams and goaltending haunted them. After 10 uneventful minutes, Ian McCoshen—he of many penalties over the last several games—went to box for slashing. A minute and 15 seconds later, Vermont’s Kevin Irwin lofted a soft shot that Demko completely whiffed on, allowing UVM to take 2-1 lead. 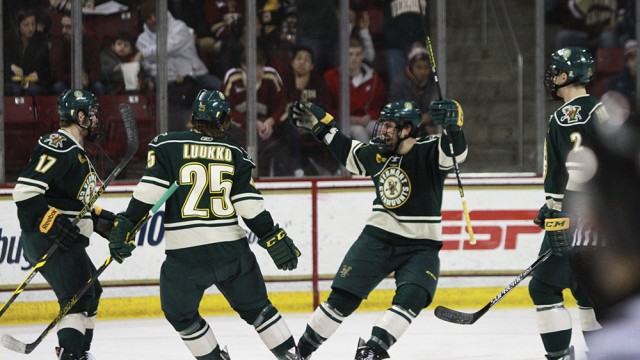 Here’s where the box score might deceive you: with 9.4 seconds left in the game, Alex Tuch knotted it all up with a goal passed Santaguida. Noah Hanifin engineered the play with a beautiful feed—the superstar freshman defenseman lofted a pass behind him from beyond the red line right to Tuch, as he dropped it past Santaguida on the goalie’s right side. 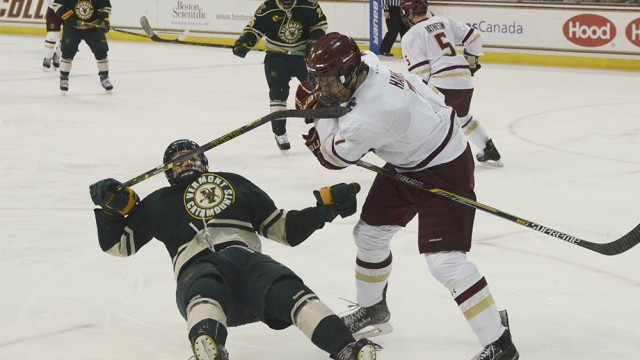 For the first time all night, the Superfans woke up—the Eagles gave off a facade of happiness, an impression that they had done enough to deserve to send this game into overtime.

And just like that, the good times vanished, as Anthony Petruzzelli knocked it passed Demko at 1:47, giving the Catamounts a 3-2 victory—only their second victory in 17 games against BC at Kelley Rink since joining Hockey East. 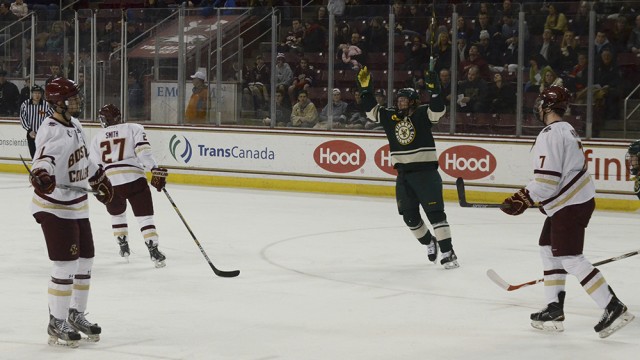 With a small crowd in the press box and a second game tomorrow against Vermont, there was no press conference after Friday’s game. Realistically, there’s not much head coach Jerry York might have had to say about BC’s performance that everyone in Kelley Rink didn’t already know.

The power play didn’t go well—it was the first time the Eagles lost this season when they scored with a man advantage (11-1). Although the Eagles only gave up one goal on the power play, they still allowed themselves to be a man down for 12 of the game’s 60 minutes, including a crucial power play near the end of the third period that almost cost BC the game. And Demko must be partially at fault for the loss, given his weak attempt at UVM’s second goal.

The game, however, all came down to the offense. BC looked anemic and incapable of getting off any good shots. If you look at the box score, it may seem like the Eagles did a decent job by coming back late only to lose in overtime.

But don’t be fooled. This team has a lot to figure out if they want to get back in the offensive groove.

Too bad that they’ll have only until Saturday at 4:30 to figure out how to do it.

About Michael Sullivan 272 Articles
Michael Sullivan was the 2017 editor-in-chief of The Heights and a two-time sports editor. He brought this paper to once a week and reminisces about the Wednesdays he could've had at BC. You can still follow his journalistic adventures @MichaelJSully.

Whirlwind Of Emotions For Eagles And River Hawks In Tie

Frustration and other feelings set in for BC and UMass Lowell Friday night as neither team could ride its momentum and figure out the opposing goaltender. […]

The Eagles won in thrilling fashion, taking revenge on the Pioneers with a Matty Gaudreau with 35 seconds to go in the game. […]

BC played a sloppy game against its crosstown rival, Northeastern, notching several huge penalties and going cold on offense for long stretches despite excellent defensive performances by Thatcher Demko and the penalty kill. […]