The desires of many frustrated alumni may finally be realized.

Boston College will pursue the creation of three new facilities to help varsity, club, and intramural sports, Director of Athletics Brad Bates announced Monday afternoon. This will include a new recreation center, athletics playing fields, and an indoor practice facility. In total, the project will cost approximately $200 million.

The new recreation center will replace the Plex and be placed over Edmond’s Hall, which will be torn down at the conclusion of the 2015-16 academic year. This was included in the University’s Institutional Master Plan (IMP) from 2009. The project will begin this summer, following the clearance of several permits, and construction will take approximately two years. The 2009 IMP also approved permits for new intramural, baseball, and softball fields to be built on the Brighton Campus.

BC’s newest development, however, is the pursuit of an “athletics field house” constructed adjacent to Alumni Stadium. This indoor facility will provide a desperately needed space for football and the spring sports to practice during the winter without having to rely solely on the bubble over Alumni. Bates, however, confirmed that the bubble will still be used as an auxiliary practice facility for teams during winter months.

University spokesman Jack Dunn reiterated that the plans for the new rec center and baseball/softball fields have been approved and the University is merely awaiting permits—that being said, those projects should begin as soon as this summer. The indoor practice facilities, however, will have to go through the approval and permit process, just as those facilities did when the IMP first came out.

The original IMP had planned for undergraduate dorms to be placed on Shea Field. Since this plan was submitted to the City of Boston in 2007, Dunn said that the University will reevaluate the housing component on Shea with the indoor practice facilityslated to go next to Alumni.

Bates expressed his excitement that an indoor practice facility will bring to BC from a recruiting and standpoint.

Bates also believes that an indoor practice facility will greatly help the University’s varsity sports, particularly football. Moving practices indoors allows football to avoid inclement weather in fall months. It will also negate time and lighting as an issue, and help BC simulate crowd noise of larger stadiums in the ACC without disrupting the neighboring residential area.

Though Bates said no red flags came up in the process, BC Athletics wanted to make sure that the plan was solid before making it public, given how big of an investment $200 million is.

As of now, contracts have not been estimated or put out to bid. That being said, Dunn believes that this project will create significant construction opportunities and could result in hundreds of jobs.

Bates estimates that, once the permits have been approved for the indoor practice facility, it will take 8-12 months to complete the project. As for what the baseball/softball fields will look like, Bates said that it largely depends on how many additional donations BC Athletics receives—however, he stated that the department has already been given significant money for these projects.

“Once we put a shovel in the ground, we’ll be able to give an accurate estimate,” Bates said.

BC Athletics has provided artistic renderings of the new recreation center and the field house. 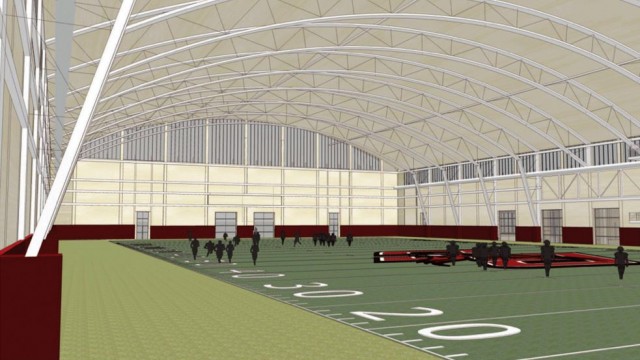 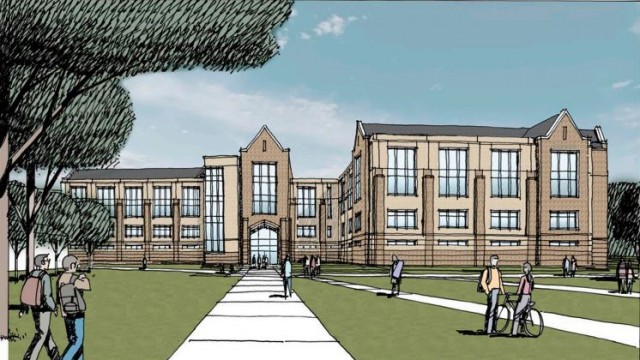 In the press release from BC Athletics, several head coaches expressed their gratitude over the pursuit of this project.

“This announcement represents a commitment from Boston College to give our students the best facilities possible,” football head coach Steve Addazio said in the official release. “We are very excited for an indoor facility that will provide our student-athletes an opportunity to develop throughout the winter months.”

“At Boston College we talk about and believe in “cura personalis”—care for the whole person,” baseball head coach Mike Gambino said in the statement. “The BC Athletics Department, and specifically the baseball program, strives to live up to that standard by making sure our student-athletes reach their full potential on the field, in the classroom and as people.  These new facilities will play a huge role in helping our players develop on the diamond and, in turn, helping our program compete on the national stage and for a chance to go to The College World Series in Omaha.”

About Michael Sullivan 272 Articles
Michael Sullivan was the 2017 editor-in-chief of The Heights and a two-time sports editor. He brought this paper to once a week and reminisces about the Wednesdays he could've had at BC. You can still follow his journalistic adventures @MichaelJSully.

Boston College football head coach Steve Addazio signed a two-year extension that will see him in charge through the 2022 season. […]

The last time Boston College football started the season with a game against an ACC opponent,  the Eagles didn’t have a happy ending. BC lost a heartbreaker to Georgia Tech, 17-14, in Dublin, Ireland to […]

Mike Bajakian will join the BC football staff as its new offensive coordinator according to a Yahoo Sports’ report. He most recently was the quarterbacks coach for the NFL’s Tampa Bay Buccaneers. […]