Boston College lacrosse is off to its best start in program history and on the brink of clinching a winning conference record for the first time in three years. The No. 2 Eagles—Inside Lacrosse Poll’s lone top-20 team with 10 or more victories—are an unblemished 12-0. One year removed from stringing together four-straight NCAA Tournament wins, en route to the school’s first Final Four and National Championship, BC is clearly a national title contender. So how do the Eagles stack up against the champions of years past?

Maryland and North Carolina have combined to win the last three national titles, facing off against each other twice in the process. To make things simple, we’ll leave 2015 Maryland out of the equation and focus on the most recent UNC and Maryland national championship teams.

Two years ago, the Tar Heels eked out a 20-2 record, winning by the skin of their teeth week after week. In fact, of their 20 victories, seven were decided by just one goal. Head coach Jenny Levy’s team recorded 13.59 goals per game, but consistently leaned on its defense, especially down the stretch of the season. Over the course of both the ACC and NCAA Tournament, the Tar Heels only conceded 7.14 goals per game. They weren’t just getting lucky either: All year, they held opponents to an average of 22.1 shots per contest—7.9 less than UNC recorded on a game-to-game basis. It didn’t hurt that the Tar Heels won 56.3 percent of their draw controls and successfully cleared 89.6 percent of their attempts. But, the next season, their numbers hardly compared to the team that they topped in the 2016 title game. 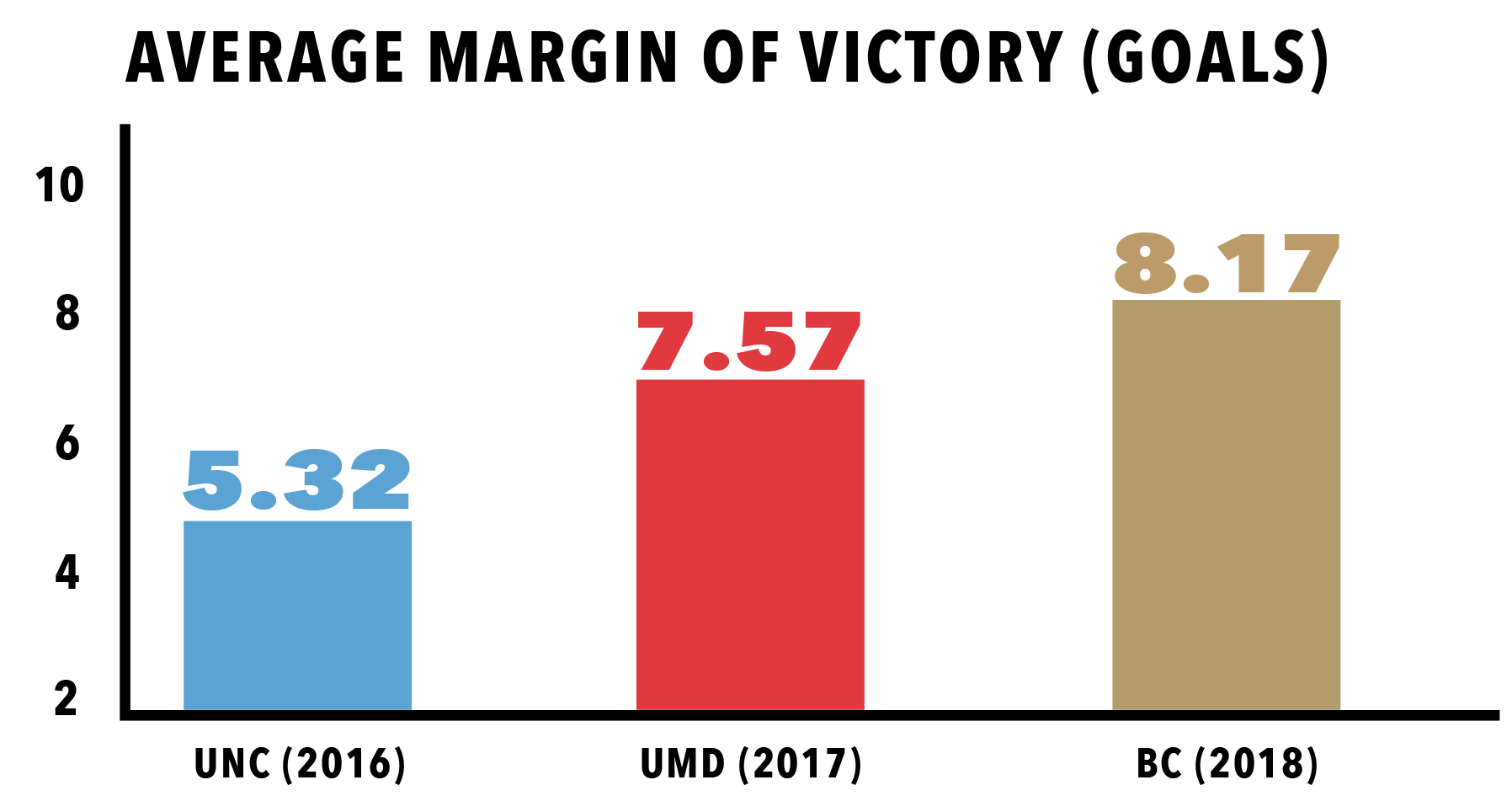 Avenging its first National Championship loss in three years, Maryland outplayed the rest of the country in 2017, winning all 23 of its games, claiming the No. 1 ranking for the last three months of the season. Not only did the Terrapins run the table, but they did so in a dominant fashion. Maryland won all but seven of its games by five or more goals, ripping twine 16.96 times per contest.

Often, the Terrapins’ scoring spurts were hinged on their relentless pursuit—Maryland logged upwards of 35 shots per game, frequently giving opposing goaltenders fits. Practically unguardable, the Big Ten Champions featured six 70-plus point scorers. Although there wasn’t one superstar per se, Maryland had a bounty of goal scorers, including five that tallied 35 or more. Despite a couple of scares from Stony Brook and BC—interestingly enough, this year’s top two teams—Maryland completed the comeback story, capping off the coveted undefeated season.

As crazy as it sounds, the Eagles are on pace to surpass both of those teams, at least on paper. Currently, BC is the only unit in the country, with the exception of Stony Brook, with an offense and defense ranked inside the top 10. Led by Sam Apuzzo, the nation’s leading scorer, the Eagles are pouring on an average of 17 goals per game. Nearly a third of that output typically serves as nothing more than insurance, considering that goalie Lauren Daly and Co. are limiting opponents to 8.83 goals per game. Perhaps more impressive is BC’s work in between the lines.

The Eagles are converting 49.8 percent of their total shots—good for fourth in the country—and 47.8 percent of their free-position attempts. They really tip the scale at midfield, though. BC is winning 61.3 percent of its draw controls, frequently maintaining possession for five-minute chunks at a time.

When the Eagles get in a rhythm like they did last Saturday against No. 5 UNC, they are practically unstoppable. Winning consecutive draws, head coach Acacia Walker-Weinstein’s crew sets up shop in enemy territory, dictating the speed of the game. With the ability to score at will from all over the field, BC is usually in the driver’s seat. And when things go awry, there’s a good chance the Eagles can flip the field and get back into scoring position—so far this season, Elizabeth Miller and the backline are posting a .907 clear percentage, a higher success rate than either of the aforementioned national-title winning teams.

In all likelihood, the Eagles will go as far as Apuzzo takes them. In both games this season that BC has found itself trailing at the half, the junior has also been starved of a goal. Yet as soon as she gets on the board, the Eagles have reverted back to their normal selves and pulled away in the second half.

That’s not to say that Apuzzo is the only one that lights up the scoreboard. BC has a trio of top-15 scorers, the others being Dempsey Arsenault and Kaileen Hart. At the moment, all three are projected to rack up more than 85 points this year. And there’s no telling what 2017-18 ACC Athlete of the Year Kenzie Kent will do once she makes her season debut. Because the senior is also part of the women’s hockey team—a program that’s made a habit of playing into March—she has no choice but to miss the first half of the Eagles’ season. Last year, Kent returned for the conclusion of non-conference play and totaled 77 points in just 12 games, adding another weapon to BC’s arsenal. It’s safe to say that expectations are even higher this time around.

The numbers speak for themselves: The Eagles have the talent, roster, and skill to win a National Championship. But they know better than anyone else that stats only mean so much, especially as the year progresses. Two months down the line, BC’s worst enemy could very well be a spitting image of its 2017 self.

About Andy Backstrom 452 Articles
Andy is the managing editor of The Heights. He is from the suburbs of Philly, but has been an Arizona Cardinals enthusiast since the first grade. Every so often, he'll replay Super Bowl XLIII on Madden to exact revenge on his father's beloved Steelers. You can follow him on Twitter @AndyHeights.

Ky Bowman led the Eagles with 23 points and nine rebounds, while Nik Popovic chipped in with 20 points, but it wasn’t nearly enough as BC lost to UNC 79-66 Tuesday night. […]

Another ranked opponent looms for the Eagles, who have won 14 games in a row to open the season, and now face No. 20 Dartmouth at home on Wednesday afternoon. […]

BC Extends Winning Streak to Five Against No. 15 Syracuse

Margo Carlin scored twice, including the game winner with four minutes left in the fourth quarter, and the Eagles won their fifth straight as they knocked off the 15th-ranked Orange. […]